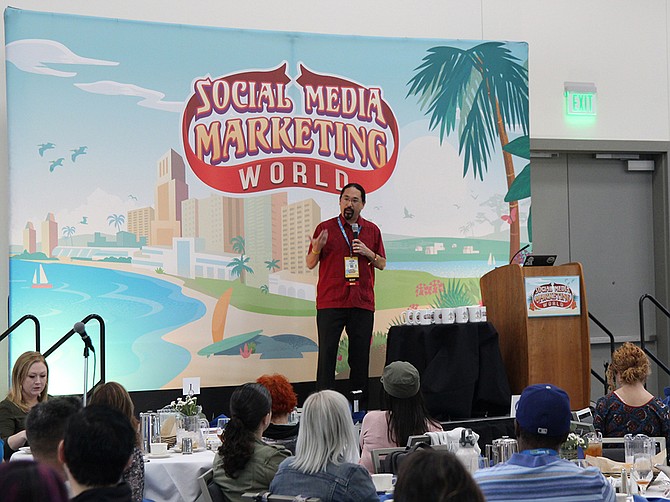 Joon S. Han is an experienced public speaker on how businesses can expand their brands into new media and has given a talk at TedxSanDiego. Photo Courtesy of Joon S. Han. 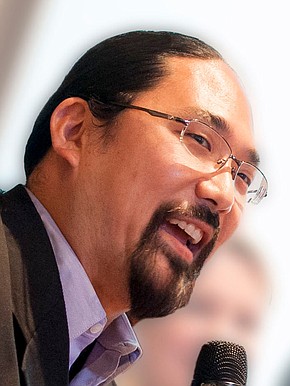 Han has focused this passion for audio into helping companies amplify their voice and he previously hosted a podcast called, “Your Biz Rocks” which breaks down the elements of a successful business.

“Podcasting, if you look at like psychologically or from a marketing perspective has got to be easily one of the most powerful forms of marketing out there because it’s very intimate,” Han said. “Very rarely does anyone listen to something in stereo, other than their own voice…And it’s the only form of marketing that is the most subversive because you basically are submitting yourself to it, or holding yourself to it all day while you’re doing other things.”

Han said he was one of the earliest Asian-American voices to forge a path in podcasting, and he sees this platform as one of the many ways his work can positively impact others.

Learning from Family
For Han, he credits his two sets of parents for teaching him everything he knows about entrepreneurship. Growing up, his family moved around the Los Angeles area and at the time, he didn’t realize it was because they were avoiding Immigration and Naturalization Services (INS).

“But we moved around all the time because we were running — running from INS and we lived in the same city, Cerritos for like three years,” Han said. “I remember thinking going into fifth grade like, ‘wow this is the longest you’ve ever lived in one place,’ and that was the year that we got caught and deported.”

Han was living in rural Korea with his family before he and his brother came back to the United States to live with complete strangers, a couple in San Clemente who he called his “white parents.”

“The hustle of my parents working five jobs between the two of them you know all this kind of stuff and it was very entrepreneurial, but lower wage kind of stuff, and then when we moved back to the United States, my brother and I were dropped in the lap of luxury in San Clemente,” Han said.

Han described the contrast of his upbringing in working-class, immigrant communities to living in an upper class, mostly white area in Orange County and how that shaped his worldview as a person.

“I learned a lot about entrepreneurship from both sets of parents,” Han said. “There’s no way I’d be as successful as I am right now if I didn’t have my white parents because they just taught me some things about, you know I think sociologists call it a ‘hidden curriculum.’ It’s not taught in school, you know, and you can get an MBA and still not learn most of this.”

Entrepreneurship
Han came to San Diego to study molecular biology at the University of California San Diego and from the age of 10, up until a month before graduation, Han thought he was going to be a doctor.

Although his degree doesn’t exactly match his line of work, Han said his interest in science makes sense because the analytical nature translates to his career path as an entrepreneur.

In his late twenties, after working a few professional jobs where he didn’t see a future, Han decided to be his own boss and started first company, Better San Diego, that provided business strategy consulting.

Since then, he has shifted his focus to advising businesses and in March, Han, Andre K. Kwan and Bernard Mauricia co-founded Trifecta New Media Group. One of the challenges of this line of work is breathing new life into an established brand and advising them on how to connect with people authentically.

“All the brands that we’re talking to for Trifecta New Media Group are brands that don’t really have any really strong new media presence…on any social platform…and they need to right, because they need to continue to get younger customers,” Han said. “But the challenge they have is, they’re not brand new companies so they have some reputation they have to uphold and they have some brand standards that need to match.”