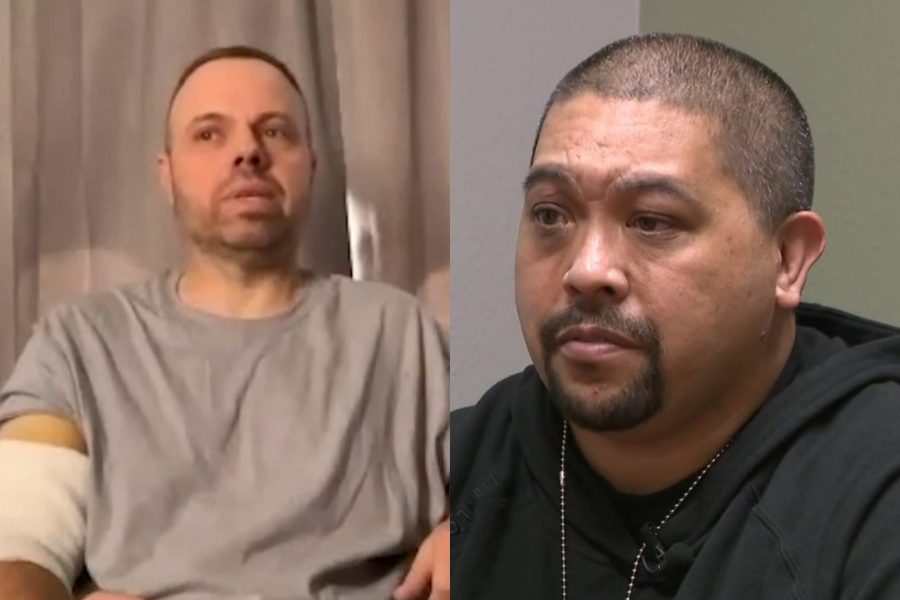 “I thought it was pretty much going to end the way it did, unfortunately,” said Agent Clark, Nunez’s partner.

An 11-hour standoff ended Monday with SWAT officers fatally shooting the 36-year-old Marquez who reportedly had threatened to hurt a woman hiding out with him in a commercial trash bin outside of San Diego High School.

About 12 hours earlier, Marquez and the woman fled when National City police tried to pull them over in the area of Interstate 805 and South 43rd Street in the Southcrest area, SDPD Lt. Matt Dobbs said. The pursuit wound its way to the north and west, eventually reaching Loma Portal via Interstate 8, Dobbs said.

There, the fleeing driver exited the freeway, then promptly doubled back and got back onto it near the intersection of Nimitz and West Point Loma boulevards.

As the suspect’s vehicle entered eastbound I-8, one of the occupants fired on the pursuing police cruiser, Dobbs said. The chase then continued to the south into the East Village, where the police vehicle was again fired on in the area of A Street and 10th Avenue.

The chase lasted until about 8:45 p.m., when the fleeing fugitive drove through a gate at the downtown high school. At that point, one of the suspects fired a third volley at the pursuing police personnel, prompting a National City officer to shoot back with his service rifle.

No officers were injured by the shootings. It was unclear if Marquez was wounded by the officer’s return fire.

After pulling to a stop on a football field at the school, the suspect and his companion got out of the car and ran off, armed with a rifle and a handgun, and took refuge in the garbage bin, Dobbs said.

Marquez’s capture had been a high priority for local law enforcement agencies over the last month, during which he allegedly fired on officers twice over a three-week period.

The first of the two firearm assaults occurred March 15 outside a home on East J Street in Chula Vista and left Agent Clark, who was trying to take Marquez into custody on a felony warrant, with non-life-threatening bullet wounds.

The second shooting took place April 5, after National City police spotted a stolen car in a Jack in the Box drive-thru on Roosevelt Avenue, authorities said. Officers surrounded the restaurant and its parking lot and were trying to make contact with three people inside the vehicle when one of the passengers — later identified as Marquez — jumped out and ran off.

Marquez then allegedly opened fire on pursuing officers while bolting onto an on-ramp from East Seventh Street to northbound Interstate 5, prompting them to return fire. Marquez escaped by running across the freeway. That shootout resulted in no reported injuries.

“This has been the most dangerous one,” Nunez said of the March incident with Marquez. “We’ve never been shot up before. This was by far the first encounter we’ve had where somebody targeted us.”

Clark still has a long road to recovery. A fundraiser was established to help him and his family navigate a difficult time.

“Still in a lot of pain, still struggling a lot, nightmares just replaying the incident over and over in my head,” he said. “Financially, not doing the greatest right now. He took the only thing that I had to support myself and other people that rely on me.”