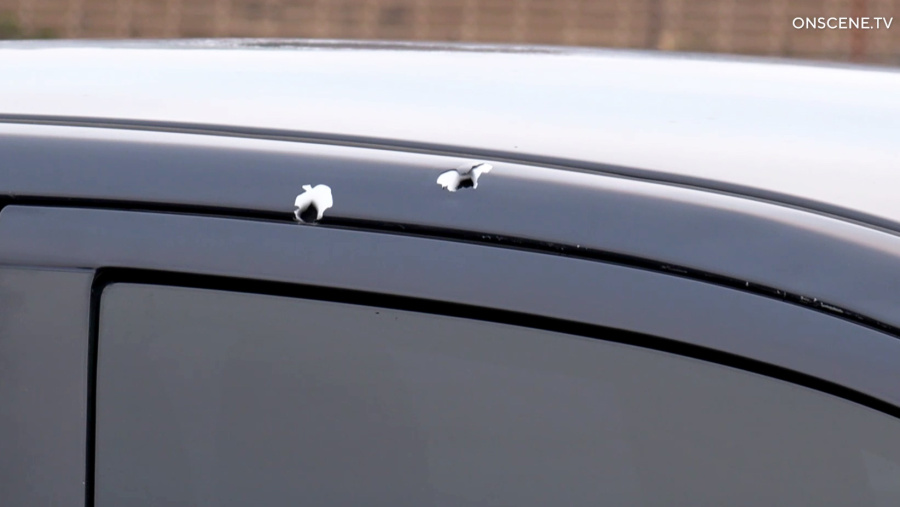 SAN DIEGO — Bullets pierced a car on a San Diego freeway early Friday after a road rage incident led to shots fired, according to authorities.

California Highway Patrol got a 911 call at 5:30 a.m. Sgt. Long with CHP said a man was driving a sedan on Highway 56 when a silver van pulled up next to him.

“I was coming on from the 15 to the 56 freeway and some guy in a van cut me off,” the victim told Onscene.TV. “I flashed my high beams at him and we kept driving. He pulled up next to me, rolled down his window. So I rolled down mine.”

The person inside the van opened fire on the sedan with two bullets hitting the victim’s vehicle above the right front passenger window, CHP said.

“No words were exchanged,” the victim said. “Next thing you know, I heard a couple bangs. I punched it to get away from him and he followed me all the way to the 5 and the 805. I got off the exit and he kept going.”

The victim was unhurt but shaken up. He called the encounter very unsettling as CHP searches for the full-size silver van involved.

“I realize that freeway shootings are a topic of significant concern right now,” Sgt. Long said. “Please, let this be a reminder to drive safely, pull over and call 911 if you’re involved in an incident like this.”

Officers are asking anyone who was in the area and may have witnessed the incident to call the San Diego office.