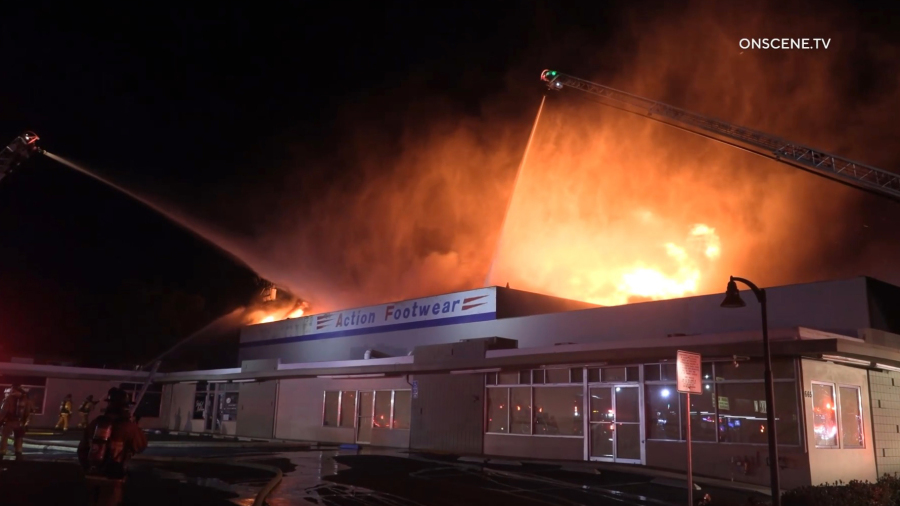 CHULA VISTA, Calif. – A massive fire that broke out last week at a shoe store in Chula Vista was an accident, federal investigators said Tuesday.

The raging Jan. 25 fire at the Action Footwear on H Street, just east of Interstate 5, was under investigation last week by national team from the Bureau of Alcohol, Tobacco, Firearms and Explosives. Chula Vista Fire Department requested the special investigators to determine what caused the fire.

City officials said in a news release the decision to call in ATF’s National Response Team was made “based upon the size of the building, the amount of fire damage, and the firefighter injuries.”

Four firefighters were hospitalized in the blaze, including one with severe burns. That firefighter remains in the hospital Tuesday with second- and third-degree burns on 20% of his body with many months of recovery ahead.

“We know that we have an inherently dangerous job,” said Darrell Roberts, president of the Chula Vista Firefighters Association, “and this is obviously one of our concerns every single day that we show up to work is knowing that we may be going to a call of significance like the fire that we had this past Monday night.”

Fellow firefighters at Station No. 1 are feeling for the injured firefighter and his family. The firefighters association started a GoFundMe campaign to cover expenses in his recovery effort.

As of Tuesday, the fund had generated more than $23,000 in donations.

“Our firefighters, they’re our family,” Roberts said. “And we are a large sister and brotherhood.”

Roberts added that while the city, insurance and other sources typically cover the majority of expenses for an injured firefighters, other expenses tend to arise such as family traveling to the hospital from outside the area, hotel stays and child care.

“These are events that are going to leave life long scars,” he said. “Our highest priority is he’s literally getting out back together in one piece that he can come back on the job. But we want to make sure that we’re there for not only him but their family.”