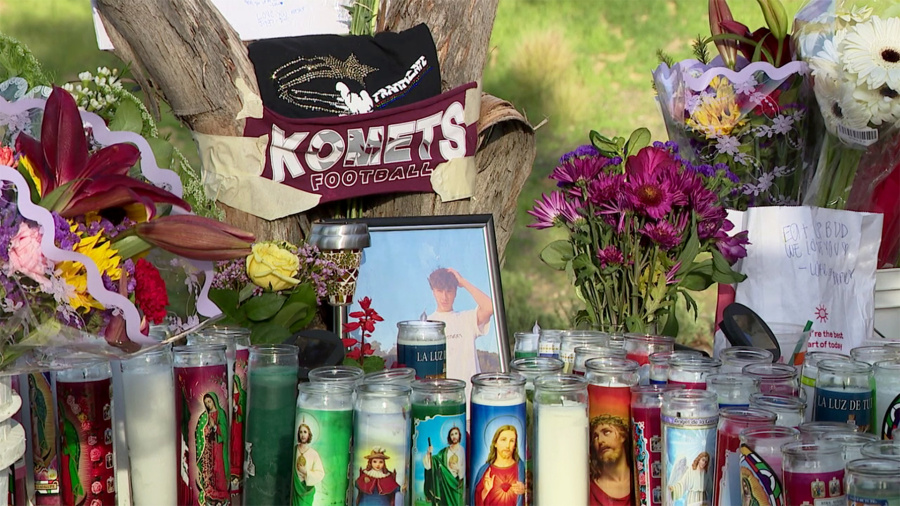 SAN DIEGO — A memorial marks the site of a crash near Kearny High School that killed a 17-year-old Friday and left eight others hurt.

Firefighters loaded victims into ambulances on Genesee Avenue near Linda Vista Road following the violent crash. It happened about a mile from Kearny Senior High School and police said the group of teens was leaving a football game.

“It was just impact, that’s all I heard and it was loud,” neighbor Edita King said.

A Toyota and a Nissan sedan, each driven by a 17-year-old boy, were “either racing or accelerating up the street” when the Toyota lost control, side-swiped the Nissan and crashed into a third car, San Diego Fire Batt. Chief Ed Kinnamon said.

“One of them hit an oncoming car, an innocent bystander, head-on,” Kinnamon said.

The teen driving the Toyota was pulled from the wreck and taken to the hospital, where he was pronounced dead a short time later. Two of the three young adults riding with him were severely hurt.

First responders said three people from the oncoming car, a Mazda sedan, were left severely injured, including the 21-year-old woman who had been driving. Three people inside the Nissan reported some pain but were not badly hurt.

Authorities haven’t publicly identified anyone involved in the crash. Candles, photos and signs have been placed near the crash site to honor the teen killed.

“I feel really bad for whoever passed away but I think something needs to be done,” King said. “It was sad. … I knew something had happened because typically there’s only two fire trucks out there. Then I saw it was three ambulances that showed up.”