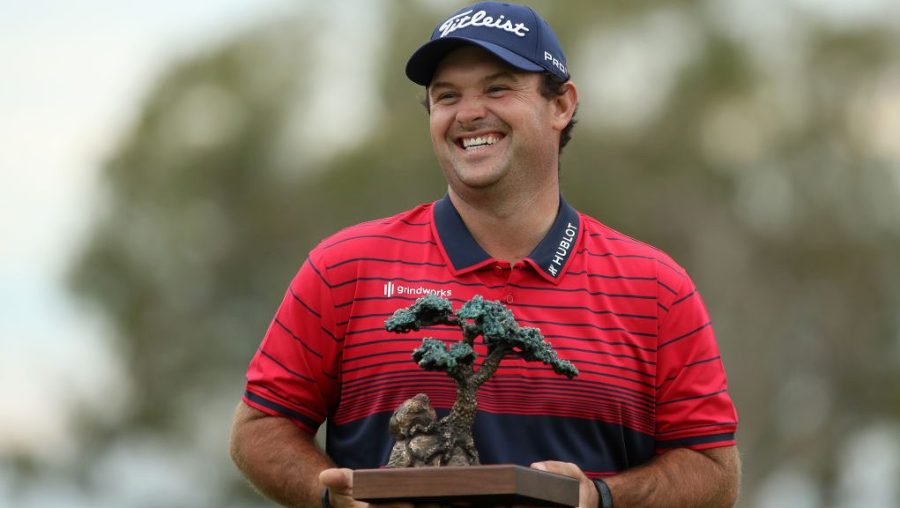 Ortiz lost his share of the lead when he bogeyed the first hole, putting his drive into a fairway bunker and second shot into the right front greenside bunker. The bogey was the first of his six for the round. He also had a double-bogey on the par-4 12th hole in a round he shot 6-over-par 78, dropping into a tie for 29th at four-under-par 284, 10 strokes off the lead.

Rahm and Hovland moved into a tie for the lead with Reed, both playing their first six holes at 2-under-par while Reed parred each of his first five holes.

Hovland, playing one group behind Reed, moved back into a share of the lead with birdies on the seventh and ninth holes, while Reed had his lone bogey of the round on the par-3 eighth hole, putting his drive into the left rough and having his 13-foot, 4-inch putt for par roll 3 feet, 4 inches past the hole.

Reed took the lead for good when he hit a wedge approach 83 yards to set up a 3-foot, 9-inch birdie putt on the par-5 ninth hole he sank to go to 3- under for the round.

Reed parred each of his first eight holes on the back nine as his would-be challengers were unable to mount a challenge.

Hovland was unable to make a birdie on the back nine with his hopes ending with bogeys on the 14th, 15th and 17th holes. He shot a 1-under-par 71 for the round, tying for second at 9-under-par 279. It was Hovland’s first second-place finish on the PGA Tour. He has won twice.

Rahm also did not have a birdie on the back nine and bogeyed the 11th and 15th holes, finishing the round at par and the tournament at 8-under-par 280, tying for seventh, his fourth consecutive Top 10 finish.

Rahm is second on the Official World Golf Ranking, the highest in the field.

“I knew coming into today was going to be a grind, especially with that leaderboard and seeing how many big names were right around there at the top,” said Reed, who received $1.35 million for his first victory since the 2020 WGC-Mexico Championship.

“I knew you were going to have to go out and play on offense, you couldn’t play defense. You had to go out there and shoot a number. It was a little kind of shaky there early on in the beginning, kind of a couple shots that seemed to kind of get a little bit away from me, but I was able to rely on the short game early and get in a groove there in the middle of the round.”

The victory was the ninth on the PGA Tour for the 30-year-old Reed, the 2018 Masters champion. He has victories in four consecutive seasons.

“This one was pretty special,” Reed said. “To go ahead and get this win, especially with making such a big swing change and changing coaches right after the U.S. Open last year, to be tied for the lead going into today and in that final group and seeing the swing kind of hold up throughout the round and allowing my short game to kind of save me there towards the end meant a lot, meant that I’m on the right path.

“The swing’s going in the direction we want it to go and it couldn’t have been better to go ahead and not just win the golf tournament, but to win it by a large margin as well as to go out and shoot in the 60s on Sunday.”

The five-stroke margin was the tournament’s largest since Tiger Woods’ eight-stroke victory in 2008, when it was known as the Buick Invitational, and the largest of Reed’s career.

Schauffele shot a 3-under-par 69 Sunday with five birdies and two bogeys for his seventh runner-up finish since his last PGA Tour victory, the 2019 Sentry Tournament of Champions.

Schauffele had missed the cut four of the previous five times he played in the Farmers Insurance Open and tied for 25th in 2019.

“It’s nice to get over the hump and have a good finish,” said Schauffele, who joined Henrik Norlander of Sweden as the two players who recorded a sub-70 score in each of the final two rounds.