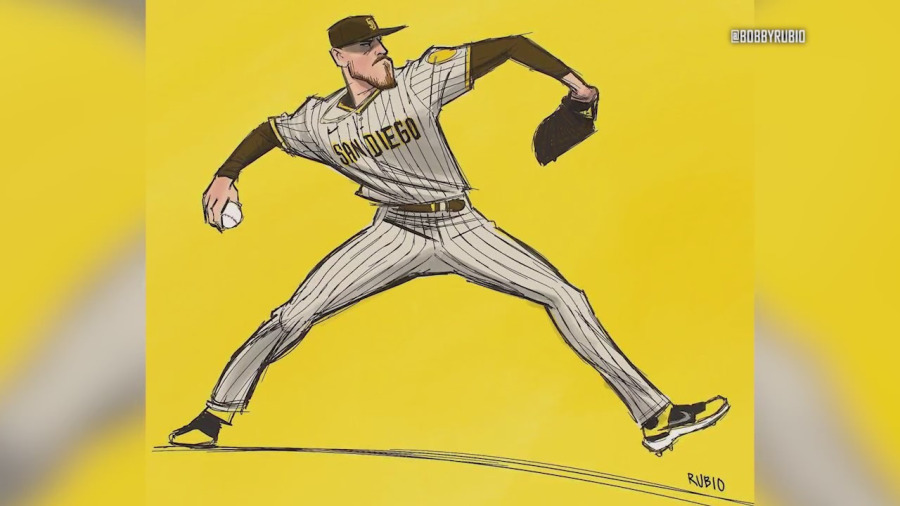 NATIONAL CITY, Calif. – Bobby Rubio grew up in National City reading comics and rooting for the Padres. He then started drawing, leading him down a path toward a dream job as a story artist at the world-famous Pixar Animation Studios.

In his down time, he still watches Padres games — and then he sketches big moments from the field.

“I was drawing very early and San Diego is a big, big, big influence on my whole career,” Rubio said.

Outside of work, he finds himself watching his beloved Friars. A typical sketch takes about two hours. He starts in the first inning of games and works until something strikes him. His sketches include some of the most memorable names and moments in the team’s history, including Fernando Tatis Jr., Tony Gwynn and Joe Musgrove from his momentous no-hitter.

“The town is waiting for something big to happen and I will be there when it does,” he said. “I want people to know that I’ve been here. I’m not some bandwagoner. No, I have been here.”

He’s spent the past 14 years with Pixar, recently releasing his directorial debut short film, “Float.” The more than seven-minute film, based on his relationship with his son Alex who is on the autism spectrum, uses floating as a metaphor to showcase a child being different.

“I wanted to tell this story about a father going through the process of accepting a son that’s different,” he said.

It has amassed more than 60 million views on YouTube since being published in February.

“It’s overwhelming and to think that it’s healing the world and people out there,” he said. “I’m constantly getting emails and notes from people across the world who the short has affected their lives and it touches me.”

Rubio now hopes to someday throw out a first pitch at a Padres games. Until then, he plans to continue sketching his favorite baseball team.