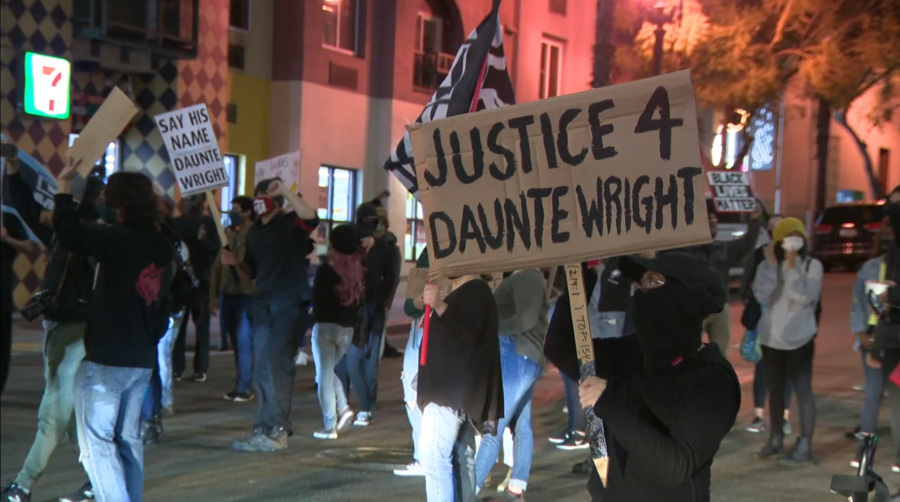 SAN DIEGO – About 100 San Diego Black Lives Matter supporters on Monday joined the national calls for justice and police reform following this weekend’s fatal shooting of 20-year-old Daunte Wright by an officer in a Minneapolis suburb.

“A mother’s terrorized tonight,” Cofield said. “I’m terrorized. This is my son and it’s just frightening to see what’s happening to Black males in this country.”

Tensions were heightened Sunday when Wright, a Black man, was shot and killed during a traffic stop in Minnesota. In a news conference Monday, Brooklyn Center Police Chief Tim Gannon described the shooting by Officer Kim Potter, a 26-year department veteran, as the result of “an accidental discharge,” according to a NewsNation report.

Police believe Potter intended to use a Taser rather than a handgun as Wright struggled with police, Gannon said.

The incident comes as testimony continues in the trial of ex-Minneapolis police officer Derek Chauvin, accused in the death last summer of George Floyd. Floyd’s death while being arrested sparked nationwide protests, including the East County community of La Mesa where a peaceful demonstration erupted into violence with incidents of looting and arson.

“You hear ‘Minnesota Nice’,” Roberts said. “Well, what does ‘Minnesota Nice’ mean for who? It’s clear it’s not for Black and brown communities. The honest truth is I don’t feel like Minnesota’s home for me. I don’t want to go back to Minnesota.”

The protest remained peaceful. San Diego police did not return a FOX 5 reporter’s request for comment.

“There has to be standards and guidelines and they have to be weeded out,” Mater Cofield said, “and this wall — this big blue wall — it has to come crashing down.”