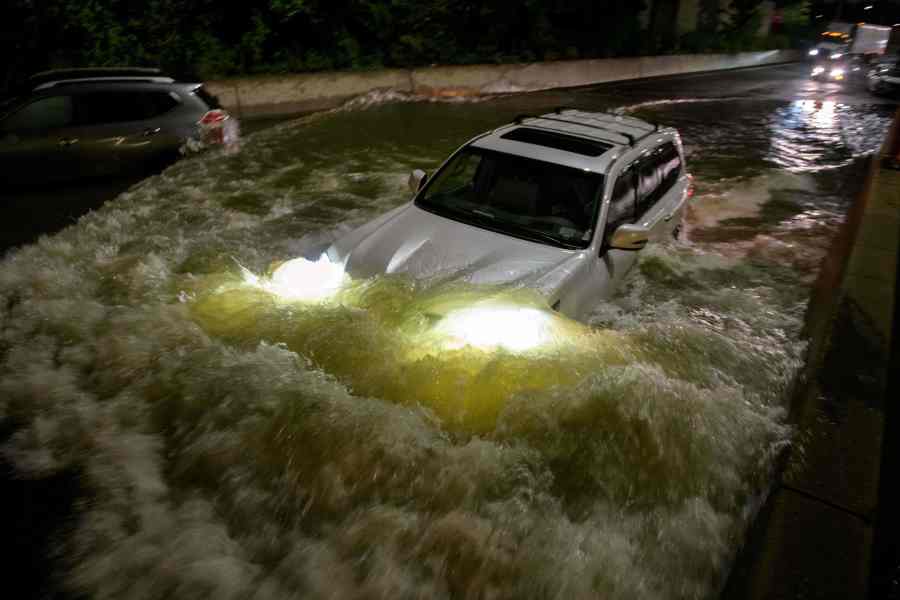 NEW YORK (AP) — The remnants of Hurricane Ida dumped historic rain over New York City, with at least nine deaths linked to flooding in the region as basement apartments suddenly filled with water and freeways and boulevards turned into rivers, submerging cars.

Water poured into subways tunnels as catastrophic flooding, which scientists have warned likely will be more common with man-made global warming, came to America’s largest city.

At least nine deaths were reported in New York City and New Jersey. A New York City police spokesperson says a total of eight people died when they became trapped in flooded basements.

The rain ended by daybreak Thursday as rescuers searched for more stranded people and braced for potentially finding more bodies.

Janno Lieber, the CEO of the Metropolitan Transportation Authority, said at least 17 trains were stranded between stations overnight. All of the riders were evacuated safely, he told TV station NY1 on Thursday.

The toll Ida has taken in the U.S. also included at least two tornadoes in the mid-Atlantic where homes were now rubble in Mullica Hill, New Jersey, just outside of Philadelphia. Police in Connecticut are investigating a report of a person missing due to the flooding in Woodbury.

At least one death was reported in New Jersey as Passaic Mayor Hector Lora said a 70-year-old man was swept away.

“His family was rescued, they were all in the same car. Unfortunately, the car was overtaken by the waters, and the firefighters who were being dragged down under the vehicle were unable to get him out,” Lora told WCBS-TV.

Authorities were trying to confirm at least one other death in the city.

Heavy winds and drenching rains collapsed the roof of a U.S. Postal Service building in New Jersey and threatened to overrun a dam in Pennsylvania.

In New York, the rain brought transportation in large parts of the bustling city to a halt. Officials banned travel for all but emergency vehicles until early Thursday. FDR Drive in Manhattan, and the Bronx River Parkway were under water. Garbage bobbed in the water rushing down streets. Some subway and rail service had resumed Thursday morning.

The National Weather Service office in New York issued its first-ever set of flash flood emergencies in the region Wednesday night, alerts only sent in the most dangerous conditions.

An emergency was issued Aug. 22 in Waverly, Tennessee, when flooding in the town and surrounding county killed 20 people after the rainfall in one day shattered the state record.

That was the start of a deadly two weeks across the nation. Wildfires are threatening Lake Tahoe, Tropical Storm Henri struck the Northeast and Ida struck Louisiana as the fifth-strongest storm to ever hit the U.S. mainland, leaving 1 million people without power, maybe for weeks.

Rescues took place all over New York City as its 8.8 million people saw much worse flooding than from Henri.

The National Weather Service recorded 3.15 inches (8.91 centimeters) of rain in New York’s Central Park in one hour Wednesday night, far surpassing the 1.94 inches (4.92 centimeters) that fell in one hour during Henri on the night of Aug. 21, which was believed at the time to be the most ever recorded in the park.

In neighboring New Jersey, Gov. Phil Murphy declared a state of emergency in all 21 counties, urging people to stay off the flooded roads. Meteorologists warned that rivers likely won’t crest for a few more days, raising the possibility of more widespread flooding.

Newark International Airport shut down Wednesday night due to the weather but was allowing limited flights Thursday morning.

Southern New England awoke Thursday to inundated roads, commuter delays and an ongoing flash flood warning. A section of Route 24 in southeastern Massachusetts was shut down because of water on the highway, and in Portsmouth, Rhode Island, a road crumbled under the onslaught of rain.

Parts of Johnstown, Pennsylvania, where 2,200 people died after a dam failed in 1889, were evacuated for a time Wednesday after water reached dangerous levels at a dam near the city. An official said later Wednesday that the water levels near the dam were receding.

In Rockville, Maryland, water had almost reached the ceilings of basement units Wednesday when crews arrived at an apartment complex. A 19-year-old was found dead, another person was missing and about 200 people from 60 apartments near Rock Creek were displaced, Montgomery County Fire Chief Scott Goldstein said Wednesday.

A tornado was believed to have touched down along the Chesapeake Bay in Maryland.

“In many years I have not seen circumstances like this,” Goldstein said.

Hurricane season in the Atlantic Ocean is far from over. Tropical Storm Larry was strengthening and moving quickly westward after forming off the coast of Africa earlier Wednesday. Forecasters predicted its winds would rapidly intensify to 125 mph (201 kph) by Tuesday, but remain well away from land.