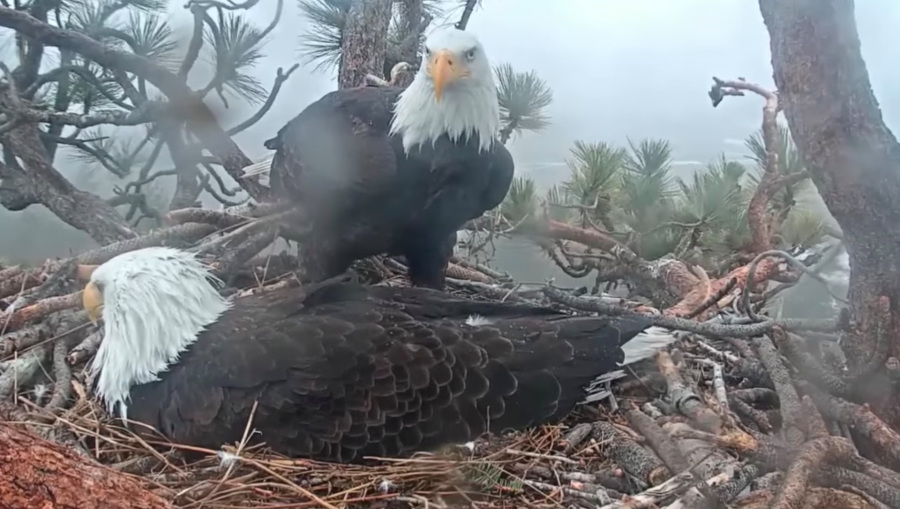 BIG BEAR LAKE, Calif. (KTLA) — A baby chick that appeared to be hatching from one of two eggs belonging to Big Bear’s resident mating pair of bald eagles has died.

“We have a pip! Hatching in progress!!” the Friends of Big Bear Valley announced late Thursday. The organization operates the 24-hour “Big Bear Bald Eagle Cam,” where fans across the world can tune in to watch the every day happenings of bald eagle couple Jackie and Shadow.

The tiny eagle even let out a few chirps from inside the egg. But Friday afternoon, the nonprofit said the chick stopped moving.

“Sometimes nature is hard to watch, especially when there is an unexpected turn of events that we do not understand,” Friends of Big Bear Valley said in a Facebook post. “We do not know and cannot know what might have happened, no matter how much our human minds would like to speculate or try to figure it out.”

The group confirmed the eaglet’s passing in a Saturday post.

“We are sad to report, after egg 1 began to hatch, it appears that sometime during the day on 3/19 the eaglet passed away,” the nonprofit said on YouTube.

The bald eagle pair, however, are continuing to care for their second egg, which is nearly 40 days old and has yet to pip.

Sometimes, however, the eggs don’t hatch at all, which is what happened to Jackie’s clutch last year. Nest failure can happen for a variety of reasons, including a lack of fertilization during mating, the embryos not lasting through incubation period or the eaglets’ inability to break out of their shells, according to the Forest Service.

In January, the eagle parents welcomed its first three eggs of 2021, but all of them were lost.