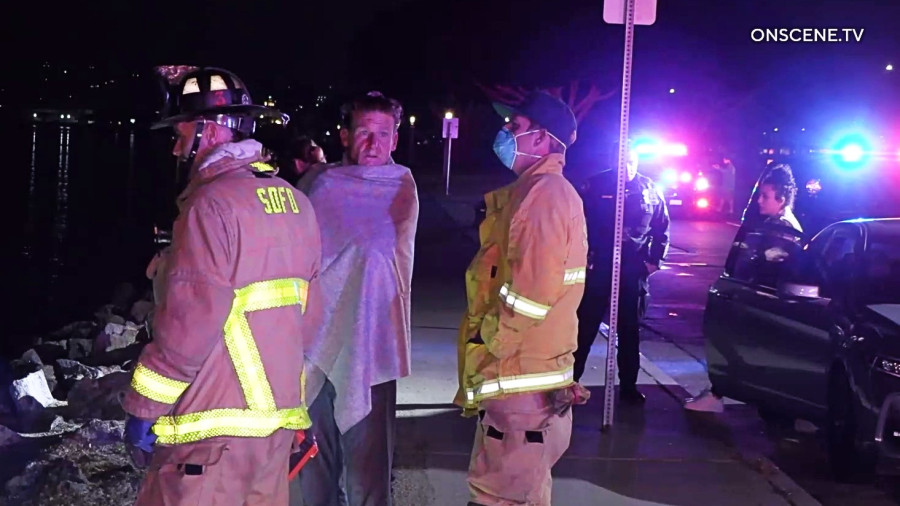 SAN DIEGO — A charter-boat captain leaped into action after a car plunged into the San Diego Bay early Sunday, though in the end, the only clue to the victims’ whereabouts was a trail of footprints leading away from the area.

The crash happened around 2 a.m. Sunday on Harbor Island. Capt. Mike Koesterer says his daughter heard the screeching of tires and what sounded like a car going into the water, so he ran out to check what had happened. He saw the vehicle submerged just beyond the rocks off Harbor Island Drive and immediately called 911, he told OnScene.TV.

The first group of authorities that arrived didn’t have a diver, the captain explained, and he decided he couldn’t wait any longer to find out if there were victims still trapped in the car. He dove in hoping to help, but after two extensive trips swimming around the car and peering in, Koesterer felt confident there was no one in the water.

As San Diego lifeguards, firefighters and Harbor Police officers arrived, a city diver was able to confirm that finding.

The only clue to potential victims’ whereabouts: Two pairs of wet footprints leading across the street, Koesterer said. Authorities noticed the trail after helping the captain dry off and warm up. He says it appears the driver and a passenger were able to escape and run off: “Two sets of footprints, so, now we know there’s no one in the car.”

Still, he said, Koesterer doesn’t regret diving in. “You know, I’m not going to let that car sit there (without) knowing there was no one in it,” he said.

Later Sunday afternoon, Harbor Police Department confirmed the car had been reported stolen. Beyond that, still no sign of anyone involved in the crash, officials said.

Koesterer, who captains a charter called the Time Machine, is no stranger to heroics on the water. He and his son once helped rescue 15 people from a boat that was rocked by an explosion as it reportedly tried to smuggle people into the U.S. Mike and his son Reeve were returning for a charter fishing trip to Mexico when they saw the blaze and headed toward it, eventually pulling more than a dozen people from the water.

“In a situation like that you don’t have time to think,” Koesterer told OnScene.TV Sunday. “You just got to do it.”