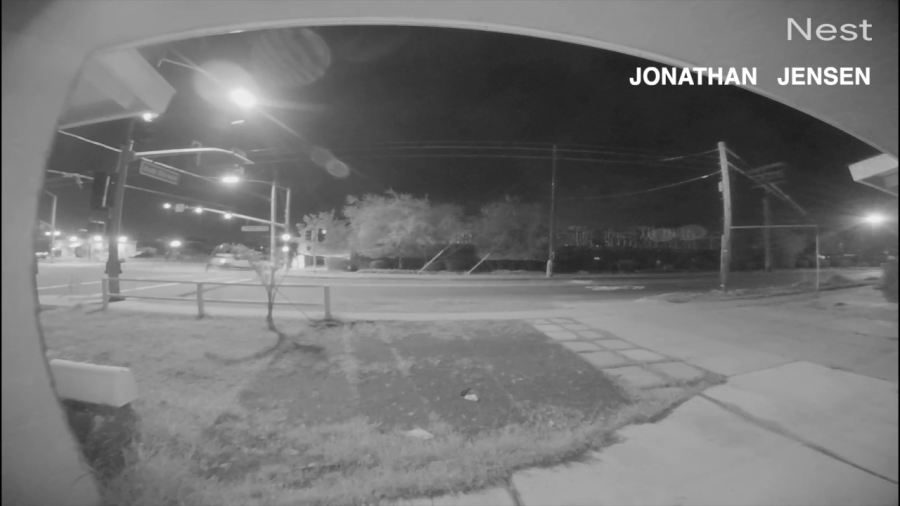 The footage from a neighbor’s Ring camera appears to show the moment two girls crashed an SUV near Mission Avenue and North Ash Street. Police said a 13-year-old took her mother’s car without permission then sped off when an officer stopped the car around 11:15 p.m. Friday.

“They apparently lost control and their car slid into the planter on the east side of the road near a SDG&E transfer facility,” Escondido police said in a statement.

When officers caught up to the girls and detained them, they discovered the car hit two men asleep in the bushes along the sidewalk. One died at the scene and the second died at the hospital.

“The car was just speeding off right here,” neighbor Ivan Calderon said. “I’m not sure if they were trying to make a turn and they didn’t handle it, and just went straight to the wall.”

Police said another 13-year-old was in the car during the crash.

“What are they thinking, you know?” Calderon said. “We read on the report that they were coming from Vista, and Vista is pretty far for you to be driving if you’re 13 years old, especially if — I don’t believe you know how to drive at that age.”

Officers said Saturday that they believe the two men killed were homeless. Former police officer Kevin LaChapelle said it is unlikely the teens will be charged as adults due to California law.

“At 14, a juvenile can be charged as an adult,” LaChapelle said. “She’s 13. The other thing you look at is intent. For example, who would’ve known that there were two men sleeping in the brush when this happened? On the other hand, they will be held accountable.”

LaChapelle says their parents could be liable.

“There should be some justice,” Calderon said. “The homeless, maybe they don’t have much family … but I believe that they deserve justice as well.”

Police also had to deal with another crash when a DUI driver hit a patrol car that was blocking the roadway during the investigation. Officers took that driver into custody.

Police said the girls were arrested and released to their parents.