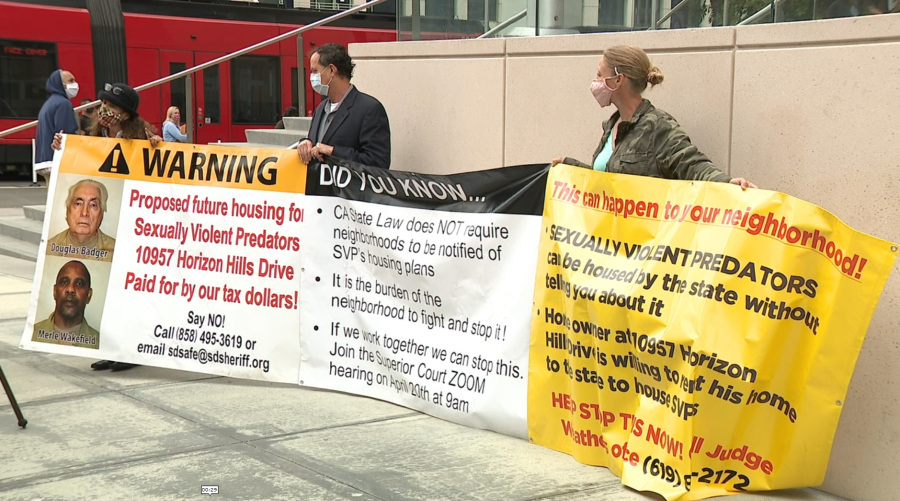 SAN DIEGO (CNS) – Elected officials and residents weighed in Tuesday on the proposed placement of a convicted sex offender in a supervised home in the Mount Helix neighborhood.

Comments from the public were shared during a San Diego Superior Court hearing regarding a proposal from the Department of State Hospitals to place Douglas Badger, 78, in a home at 10957 Horizon Hills Drive.

Badger petitioned for release into the Conditional Release Program — or CONREP — for sex offenders and was granted conditional release earlier this year. Parameters of the conditional release include GPS monitoring and rules against venturing outside the home unless accompanied by a representative from Liberty Healthcare, which contracts with the state to supervise SVPs.

Should he find the location to be unsuitable, the state will be tasked with finding another site to house Badger.

Kym Caudle, regional coordinator for Liberty Healthcare, said, “We are confident we can safely manage this person, both monitoring his supervision as well as treating him in the community as he’s earned at this juncture in his treatment.”

Badger’s attorney, Amy Hoffman, said no SVPs conditionally released in the county have re-offended and Weathers also said he was unaware of any SVPs re-offending locally, which would result in the offender being sent back to a state hospital.

Between 1959 and 1991, Badger was convicted of offenses ranging from child molestation, to kidnapping and forcible oral copulation, with his victims predominately being male strangers, many of them hitchhikers, according to the San Diego County District Attorney’s Office. He was most recently sentenced to state prison in 1991 and was civilly committed to a state hospital in 1997.

Deputy District Attorney Martin Doyle said the DA’s Office opposed the Mount Helix placement, saying it was “so different and so outside the norm of what Liberty and CONREP have proposed in the past.”

The neighborhood differs from prior SVP placements, which have typically been in communities that are remote and sparsely populated. Doyle said the location would not constitute a good placement for Badger “either for this treatment or more importantly, for community safety.”

Weathers also heard from residents, some of whom said they were angered over not receiving input on how the Horizon Hills Drive home was selected, nor what led officials to conclude conditional release was appropriate for Badger.

Others raised concerns with the home’s close proximity to residences in the area where children live, as well as nearby schools.

Theresa Kemper, superintendent of the Grossmont Union High School District, said the house was within three miles of two elementary schools and a high school.

“We strongly believe that approving this proposed placement would have grave consequences,” Kemper said.

Others echoed sentiments raised recently by Sen. Brian Jones, R- Santee, to house Badger in a trailer on the grounds of a state correctional facility, as has been done with some sex offenders in the past.

Caudle said placement in a trailer at Richard J. Donovan Correctional Facility “is not a viable option at this time,” per communications with the California Department of Corrections and Rehabilitation.

County Supervisor Joel Anderson asked the judge to be “fair and reasonable” and not place Badger in his district, which he said has received 67% of the county’s SVP placements.

“Allow other people to bear some of the burden, not just the poor people in my district,” Anderson said.