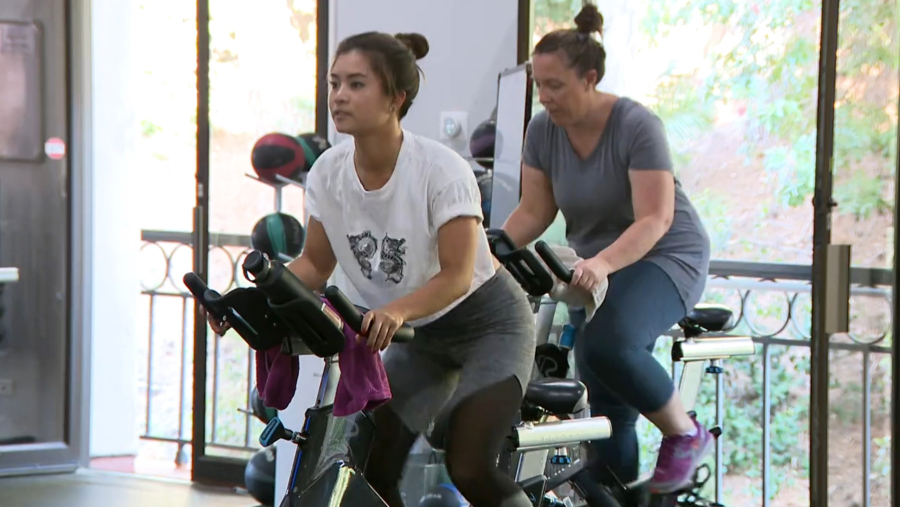 Now nearly a month into being in the state’s orange reopening tier, gyms remain among the most restricted under public health guidelines. Currently, gyms and fitness centers are allowed to open indoors at 25% capacity and up to 37.5% if all guests are fully vaccinated or show a negative COVID-19 test.

For some smaller gyms, the limits arguably make it difficult to reopen at all.

Although on the smaller side, Studio Sweat owner Cat Kom is glad to be back in business. Founded in 2010, it has a loyal client base. But even with indoor workouts permitted in the orange tier, some people have been hesitant to return.

“People have been so physically inactive,” Kom said. “There are so many people that are so out of shape right now and they are embarrassed to come back. There’s so much that goes into why fitness centers are still struggling.”

In the least-restrictive yellow tier, indoor capacity for gyms moves to 50%. There is no level after yellow, but state leaders say if California has enough vaccine supply and enough hospital capacity, it potentially could reopen fully by June 15.

When the county was in the red tier, capacity was limited to just 10% indoors while other industries like retail allowed for greater percentages of people indoors.

“It was a bit frustrating to see the capacity limitations on every other industry be looser than they were on fitness centers,” Kom said.

Kom has felt the strict capacity limits being imposed on gyms also contributed to people being unsure about returning. Still, others are thankful to finally be back.

“This last year has been the hardest of my career and having fitness has literally saved my existence,” Angela Presley said.

Presley, a psychologist for a school district, said she has seen what some have turned to especially when fitness was not as accessible.

“Working with families, I’ve recognized the rise in medication usage, alcohol use, even amongst friends not just in a clinical situation,” she said. “People have leaned on that and this has kept me from needing any of that.”


Herd immunity to COVID-19 unlikely in US, experts say

Fitness industry lawsuits in the state of California haven’t been successful yet and even as we inch closer to further reopening, Kom says they are continuing the fight in hopes these types of restrictions don’t happen again.

In the future she believes elected leaders will recognize the importance of exercise and the role it plays in keeping us healthy.