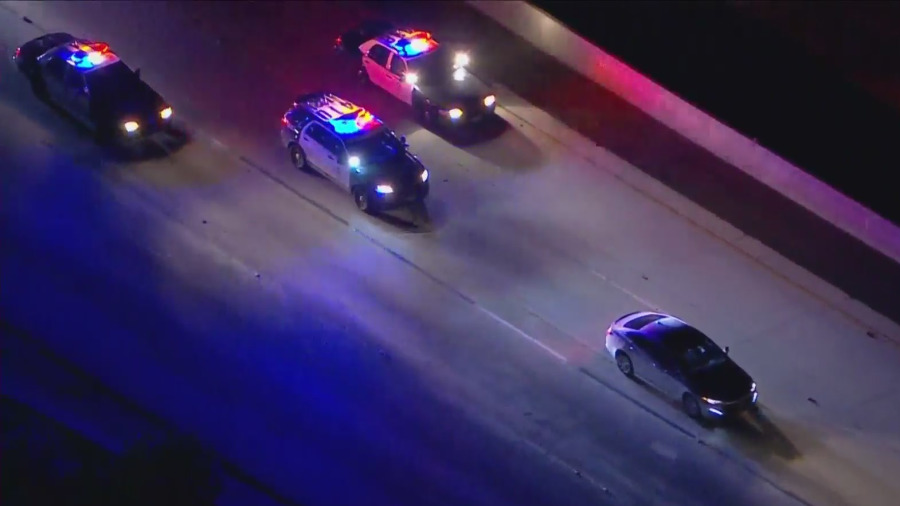 Authorities were chasing a vehicle across Los Angeles County Tuesday night, from South L.A. to San Pedro and back north into Hollywood and the San Gabriel Valley.

Around 7:04 p.m., the Los Angeles Police Department started chasing a driver suspected of having a weapon, according to LAPD spokesperson Rosario Cervantes.

Sky5 arrive above the scene around 7:30 p.m. as the silver sedan moved through Crenshaw Boulevard and 39th Street in Baldwin Hills.

The car drove through a red light, making a left at an intersection in the Hyde Park neighborhood.

By 7:40 p.m. the car was going eastbound on Slauson Avenue, moving through a residential area as at least three police vehicles followed close behind.

The driver was moving erratically through several intersections, nearly crashing into at least one vehicle.

The vehicle then got onto the southbound 110 Freeway at 7:46 p.m., slowing down, with at least six police cars following close behind and a helicopter unit overhead.

The car continued slowly down the freeway for miles, making its way into San Pedro. At times it appeared to be driving no more than 10 mph, with its emergency flashers engaged.

When the pursuit vehicle reached the end of the southbound 110, it turned around and headed back up the northbound 110.

At certain points along the route, spectators were waiting on overpasses to get a peek at the lengthy chase. Law enforcement vehicles began blocking on-ramps and diverting traffic to prevent other drivers from getting swept up in the pursuit.

By about 9 p.m., it had reached downtown Los Angeles, where the suspect’s car merged onto the northbound 101 Freeway.

Just before 9:30 p.m., Sky5 left the scene to refuel as the chase was continuing north on the 101 through Hollywood.

A few of the vehicle’s tires did appear to have begun deflating when Sky5 returned to the chase shortly before 10 p.m.

At that point, the driver was headed east on the 10 Freeway in the East L.A. area and into the San Gabriel Valley.

The chase’s pace remained sluggish. Shortly before 11 p.m., it had reached the El Monte area.

The pursuit was still going eastbound on the 10 Freeway in the West Covina area when Sky5 left the scene at 11:40 p.m., nearly five hours after the chase began.