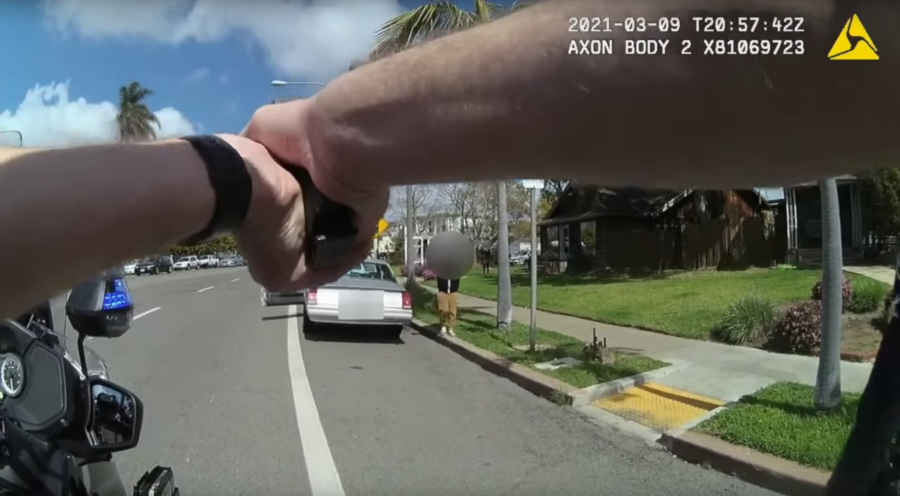 WARNING: The video in this story shows body camera recordings of a police officer pointing a gun at a suspect during a recent incident that some viewers may find objectionable.

SAN DIEGO (CNS) – San Diego police on Wednesday released body-worn camera footage of a contentious Hillcrest traffic stop this week they say refutes social media allegations that an officer pointed his gun at a young boy in the incident.

Cellphone video shot by a witness to the enforcement action on Park Boulevard near Upas Street early Tuesday afternoon appeared to show the lawman aiming his gun at the suspect’s car after the man — who initially had failed to yield for a speeding violation and led officers on a brief pursuit — was in custody.

Once posted online, the images prompted some expressions of disbelief and outrage.

Police officials countered that those protests were unfounded, as evidenced by the images shot by the camera on the uniform of the officer in question.

“The body-worn camera footage is being released due to misinformation which is circulating on social media regarding this incident,” SDPD public- affairs Lt. Shawn Takeuchi said Wednesday afternoon. “We hope the release of this video will provide clarity as to what occurred.”

The patrolman’s video shows his gun extended toward the driver as he follows orders to exit his car with his hands up and to back slowly toward other officers, who take him into custody.

Police then call out the driver’s son. At that point, the officer’s camera captured images of his gun extended in the general direction of the car, but seemingly aimed somewhat downward toward the back of the car or the street.

As soon as the child gets out of the vehicle, the officer’s gun can be seen moving to the side and more sharply toward the asphalt, until it is aimed 15 feet or more to the side of youngster as he walks over to a motorcycle officer on the roadside.

While the boy is being detained, the officer with the gun can be heard directing him in a calm voice to put his hands over his head and saying, “Just come over to us, all right? You’re good, bud.”

During the process, the voice of an unseen man, seemingly a witness, can be heard asking if the officer was going to “take that gun off” the child and protesting, “He’s 8 years old, bro!”

In a statement that precedes the uniform-camera footage in the department’s online posting, the agency asserts that “at no time” was the officer’s gun trained on the boy.

“We hope the release of this video will provide clarity as to what occurred,” the SDPD spokesman said.