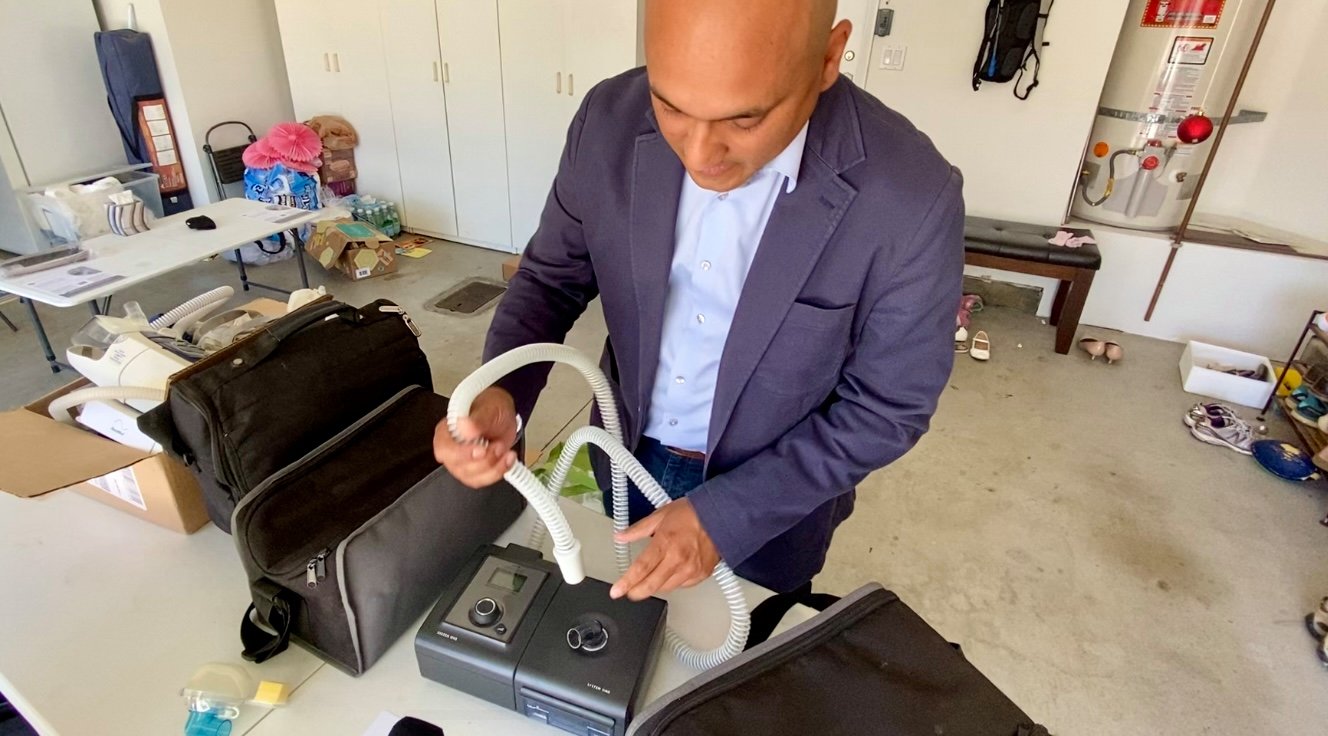 While the rest of the world is shifting into a recovery mode from COVID-19, India is being ravaged by a devastating second wave of the virus, overwhelming hospitals and straining an already-dire oxygen and ventilator shortage.

The crisis is inspiring one San Diegan group to capitalize on a machine found in millions of American homes to save lives overseas – all from a Carmel Valley garage.

“You can’t build a medical ventilator in a garage, but this can be done in a garage,” said biomedical engineer Dr. Sakya Tripathy while holding a donated CPAP machine. “This is just something that is lying around in most of our homes and with tubing and a mask, you put it together, and you have a really nice, inexpensive ventilator…It’s a really interesting and innovative solution to a very complicated problem.”

Tripathy’s college roommate, Stanford University Prof. Manu Prakash, developed the unconventional and cost-effective idea to repurpose CPAP and BiPAP sleep apnea machines into non-invasive ventilators at his Bay Area laboratory at the start of the pandemic.

It quickly caught on, with hundreds of used and new machines being donated from the Bay Area to hospitals in areas of India with fewer resources in recent months.

Now, Tripathy is bringing the cause to San Diego and opening his garage to donations.

“In the last week or so, I asked people who have donated, ‘Where was this before?’ and they say, ‘Just sitting in the garage,’” he said. “This is a useful mission. This is the perfect use for those machines.”

He says over 20 million Americans suffer from sleep apnea – and most of them are treated with breathing machines. Insurance covers the cost of a new one every few years, leaving millions of machines either thrown away or collecting dust.

Tripathy told NBC 7 the machines are all sanitized after they’re donated, then he and other volunteers repurpose them using additional donated parts.

He says the cost of a ventilator is roughly $80,000 U.S. dollars in India and if he were to buy the CPAP or BiPAP machines instead of receiving donations, each one would cost between $500 and $2,000.

Manya Gaurav, a volunteer with the group, says the world’s most second populous country is “still in the middle of this crisis” and slow vaccination rates are helping the disease spread even more.

“A lot of patients are dying because of collapsing lungs, but if this can be accessible for those patients, at least they can be sustained for a few more weeks,” Tripathy said. “This is not equivalent to industrial-grade ventilators, but it’s essential right now. Anything at all helps.”

While infection numbers have dropped from horrific peaks last month, over 100,000 cases are still being reported in India daily and thousands of unreported COVID-19-related deaths were discovered Wednesday.

According to official figures, India has the second-highest number of COVID-19 infections after the U.S, with 29 million cases and almost 360,000 deaths.

“This kind of second surge is overwhelming for the entire medical community over there,” said Tripathy. “A few of my friends who are doctors there, they’re crying that they don’t have stuff to help them. They feel very sorry.”

Gaurav told NBC 7 she considers the effort a personal responsibility.

“It hurts when you see people in crisis,” she said. “I do not want to feel helpless about not doing something, in spite of knowing that there is a chance we can utilize something lying around and possibly save people’s lives…not being able to help is a feeling that we do not want to live with so if we can do something, we should do something.”

The San Diego-based group of roughly 15 volunteers plans to retrofit the machines with donated parts to convert them to ventilators on June 20 to then ship to India.

Tripathy says they’re trying to send as many as they can before the end of July, when the country may reinstate taxes on medical imports, which he says could add over $200 in taxes per machine to be able to ship into the country.

The group currently has two drop boxes in Mira Mesa and Carmel Valley, and is working on opening a third soon.

If a machine can’t be dropped off, the group is offering to pick them up.

For more information on how to donate machines, click here.