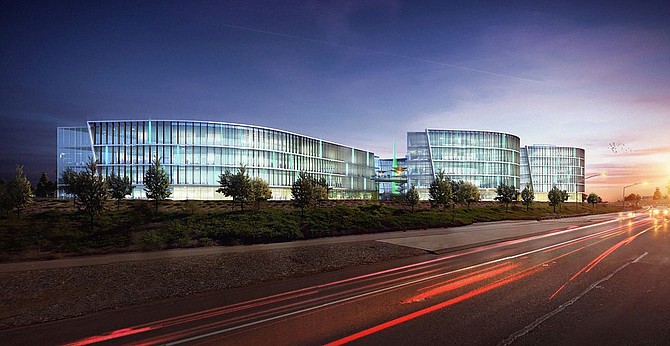 THINK would be the first building in a 1.5 million square-foot high-tech campus planned by Chesnut Properties.

Lee Chesnut plans to break ground this summer on a retooled South County project that could have 1.5 million square feet of office space geared toward high-tech companies working with automated vehicle research, drones and other automated projects.

His plan is to build the Chula Vista project in three stages, starting with a $150 million campus that he’s named THINK, but Chesnut said that he could move quickly to build it all and even build up to 3 million square feet of space if the demand warrants.

“It’s possible that this is going to be the big event for South County because we finally discovered the amazing opportunity for South County related to incredibly important research and development, said Chesnut, owner of Chesnut Properties.

Chesnut originally proposed the project in 2018 as a general office park. He said financing issues, permitting and the pandemic delayed the project.

The total project would be divided into three campuses – the two-building THINK and two other campuses that he has named DISCOVER with a single 420,000 square foot building and INVENT, a more than 700,000 square-foot campus with four buildings.

The timing of construction would depend on how successful Chesnut is in attracting tenants to THINK and permitting.

“We have to be successful with the THINK campus in order to build the next phase,” Chesnut said. “We will see how the market responds to this opportunity.”

“This is a monster deal for San Diego but this isn’t a San Diego site. This is a national or international site, that’s how we view this thing,” Urie said, adding that space in Millenia Smart could go to several companies or to a single company that wanted to establish a major presence.

Historically, high tech and life science companies have clustered around UTC, Sorrento Valley, Sorrento Mesa and the I-15 corridor, but Russell said space is running out in those submarkets.

“Basically, what you have is a lot of competition for a limited amount of supply,” Russell said.

Crockett said Millenia Smart Park would be “a game changer for the region.”

When fully built-out, the project would create more than 1,000 jobs, according to Chesnut.

When Chesnut in 2018 first talked of creating what he had called Millenia Office, he said he expected to start construction in September 2018.

In a way, the delay worked to his advantage because it gave him time to rethink the project and reimagine it at the suggestion of his marketing team to focus on high tech companies at a time when the general office market is faltering as a result of the pandemic.

Chesnut credited JLL with suggesting the change of focus.

“They saw we had something special,” Chesnut said.

Chula Vista is the perfect location for what he envisions because it is the only city in the country with federal recognition for autonomous vehicle and unmanned aircraft systems testing and validation, Chestnut said.

The U.S. Department of Transportation also has designated Chula Vista and the broader San Diego region as one of 10 autonomous proving grounds in the nation.

Millenia Smart Park also is near FAA (Federal Aviation Administration) airspace for drone testing and the nearby Brown Field has been designated by the FAA for potential large drone testing.

Chula Vista Mayor Mary Salas said Chesnut’s change in focus for the project “really reflects what we’re trying to do out there.”

Salas said the city has been working “on so many innovations” that would be mutually beneficial.

She said a number of small companies are already working in the area on projects with drones, autonomous vehicles and other autonomous technology.

“So many of our community members commute, or they did before COVID, to Sorrento Valley and other tech hubs,” Salas said.

The initial THINK building “will be the first Class A office building built in the city for 25 years and will be bringing the jobs that we’ve been so desperately needing,” Crockett said.

“What I love about Lee is he’s innovative in his approach and he looks for different ways to differentiate himself and the city from other typical markets you see elsewhere in other parts of San Diego County,” Crockett said.

The city already is on the forefront of drone research and use.

“If we want to get eyes on the scene quickly, we launch a drone,” Crockett said. He said the city has two existing FAA (Federal Aviation Administration) drone sites and recently received approval for two more in the eastern section of Chula Vista.

James O’Callaghan, president and CEO of the South County Economic Development Council, said the area should appeal to the high tech companies Chesnut wants to attract to Millenia Smart Park because it has a ready pool of skilled workers to draw from and because of its proximity to Mexico.

“We have so many companies that are working both sides of the border. We really have a unique opportunity to work with a diverse sector of businesses,” O’Callaghan said. “We’re eager to see a project of this scope get off the ground.”

Mel Anunciado, program developer for Action Drone USA based in Chula Vista, said Chesnut is right on the mark in appealing to companies that work with drones and autonomous vehicles and other autonomous products.

“It’s been proven that a lot of companies already come down here for drone testing,” Anunciado said. ‘You could have different companies that work in similar fields work together in this ecosystem.”

Construction of Millenia Smart Park would come at a time when the high-tech market is booming in San Diego County, according to JLL and the commercial brokerage CBRE.

San Diego ranked seventh out of the top 30 tech markets in North America for tech markets “that are most resilient and poised for growth,” according to CBRE.

“The region had the eighth highest growth rate for high tech software/services job growth during the 2018-2019 period at 15.4%,” CBRE reported. “Despite the economic slowdown in 2020, the tech sector was a glaring bright spot for the local economy in San Diego. Venture capital continues to flow as startups and giants alike announced expansions in the region. Combined with the region’s progress as a life science cluster, the outlook is bright for San Diego as a major innovation hub on the global stage.”

“All of that is strong in San Diego County and has bounded back from the initial months of the pandemic where job losses were widespread and affecting everyone,” Velasquez said. “They’ve recovered, more than recovered.”

Velasquez said what he termed the “innovative industry” indirectly or directly accounts for about 30% of employment in San Diego County.

Drone-related, autonomous vehicles and other autonomous products are a small but growing part of that, Velasquez said.

“We don’t have any real reason to believe that will slow down,” Velasquez said. “The larger megatrend points toward increased demand for autonomous solutions, whether that’s individuals getting from point A to point B or delivery of goods and services.”