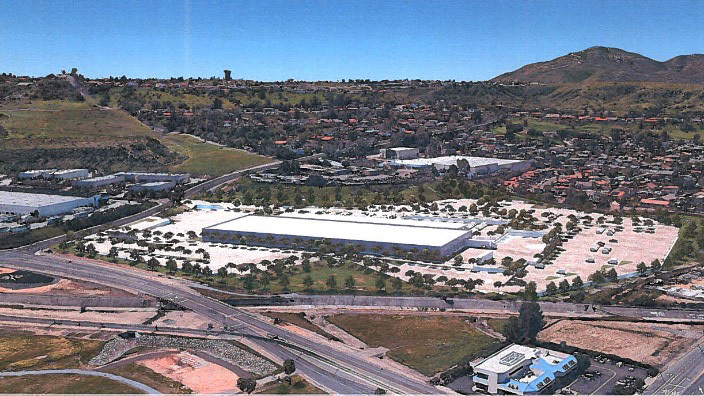 SAN DIEGO (CNS) – The San Diego County Board of Supervisors Wednesday unanimously approved a 50-year ground lease for a property near Gillespie Field where a 141,360-square-foot distribution center is planned.

The board previously delayed a decision during its March 3 meeting, after hearing from area residents opposed to any warehouse on the property, which is owned by the county. San Diego-based Chesnut Properties will develop the warehouse on a 29 acre-parcel on the northwest corner of Weld Boulevard and Cuyamaca Street in El Cajon.

According to county documents, its airports division and SGCLMC-WELD Investment Co. — an entity of Chesnut Properties — have negotiated terms for potential development of the “last-mile” distribution center for an unnamed e-commerce company.

County documents also state that SGCLMC WELD would invest a minimum of $20 million in required improvements to the property and pay rent of $420,000 in rent annually.

According to the county, the warehouse will generate more than 400 jobs and be located near a trolley station and bus stop. It will be designed with 100% renewable energy and water conservation in mind, and have electric vehicle charging stations, noise- and light-reduction features and onsite solar power.

Those in favor of the project touted the economic benefits, along with the building’s numerous ecologically friendly features, while opponents said the noise, non-stop delivery truck traffic and possible negative environmental impacts aren’t worth it.

Some also said they were opposed to online retail giant Amazon — which has been faulted for workplace safety violations and poor wages — possibly operating the warehouse.

But Lee Chesnut, founder of Chesnut Properties, said during the virtual board meeting that he has no deal with the company. An Amazon spokesperson also told City News Service on March 3 that the company has no plans to operate the warehouse.

Supervisor Joel Anderson, in whose East County district the project is located, said the warehouse is badly needed in a community where 21.7% live below the poverty line.

“We’re talking about the potential of 400 jobs, maybe as many as 600 jobs,” he said. “When we talk about equity, this is a prime example.”

Anderson added that the project initially was going to be 400,000 acres, and its size has been reduced considerably.

“We know (delivery) trucks are gonna roll, whether they roll locally or across the county,” he said in response to critics of the project.

Board Chairman Nathan Fletcher, who voted in favor of granting the lease, said “the elephant in the room is Amazon, and whether it may or may not lease this building.” Given that company’s poor track record of protecting worker rights, opponents have legitimate concerns, Fletcher said.

However, a future county ordinance regulating warehouse operations could also apply to lease-holders, and “I think we’ve arrived in a good place about a project we can support,” Fletcher said.

Supervisor Nora Vargas said there are many distribution facilities in her district, and she “appreciates projects that embrace clean energy goals.”

“For many, many years, we have worked tirelessly to develop the business potential at Gillespie Field,” he said. “Today’s action is an important first step in bringing more good paying jobs to East County, a community that has been hit hard by the COVID-19 pandemic. I am confident this lease will serve as a springboard for future economic growth as business leaders recognize that East County is open for business.”

In a statement released after the board meeting, Chesnut said his company won’t be able to lease the building until it has finalized the ground lease with the county and receive permits from the city of El Cajon.

“This is a prime location for industrial use,” Chesnut said. “With my experience developing high-quality commercial real estate projects in San Diego and Arizona, I am confident we will deliver a project that meets all requirements.”

“Since I got involved with my first project in El Cajon 30 years ago, I have seen the amazing potential in this vacant land at Cuyamaca and Weld,” he said.

Chesnut said being a good neighbor has been important to him since he and his colleagues began designing the warehouse project.

“I have met with our next-door neighbors a couple times now and I look forward to a continued relationship with them,” he said. “I have pledged to be responsive to their concerns in the future, and they know they can reach me personally if any issues come up.”