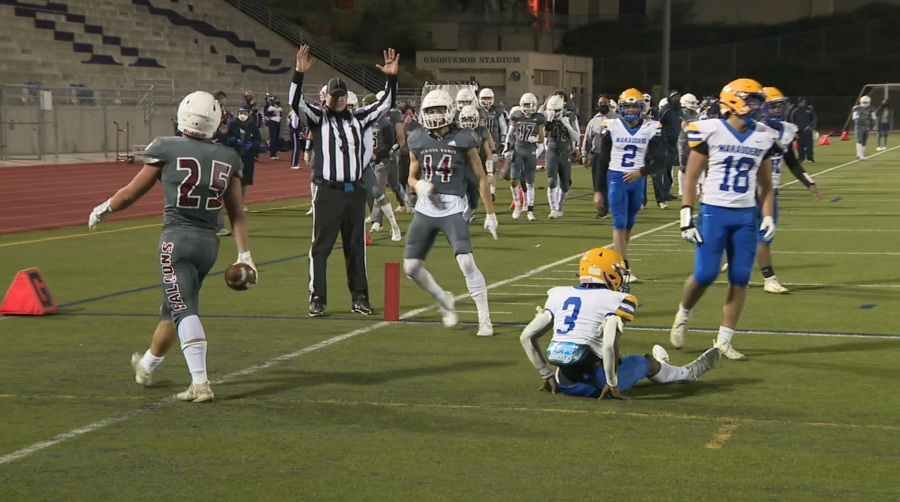 SAN DIEGO – Friday night lights are back on in San Diego County, even if it took until mid-March for it to happen.

High school football made its return to the area after being sidelined for months due to COVID-19 pandemic restrictions, delays and a high-profile court challenge. Scripps Ranch opened its season Friday with a 21-0 victory over Mira Mesa, led by a two-touchdown night from Nicholas Gardinera.

Scripps Ranch head coach Marlon Gardinera, a vocal advocate of the Let Them Play initiative, said the night was a win for students struggling amid the pandemic.

But while players were back on the field, some families had to get creative to see the long-awaited return. Parents lined portions of the fence surrounding the stadium to steal a peek of game action, as no spectators are allowed, at least for now.

“Why don’t they just do 50% capacity or every other seat or 6 feet?” parent Cindy Bell said. “I mean, we’re adults. I think we can do it. This is very crowded. It’s dangerous. Yeah, this is a little crazy.”

Some athletes say they feel like they’re waking up again, though it’s still a long way from business-as-usual.

“It doesn’t feel normal because there’s no crowd,” said Brooke Kirstein, cheer captain at Scripps Ranch. “We can see the parents out there and it feels good to be back even though the circumstances, obviously.”