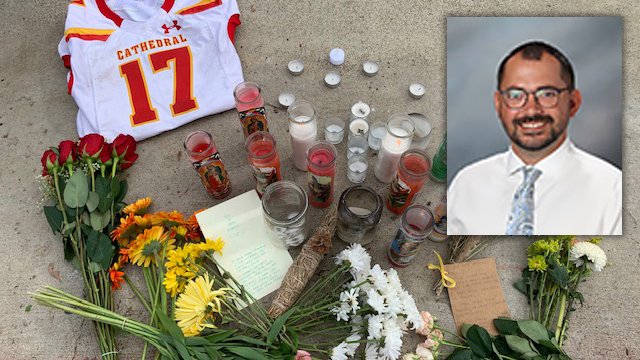 Friday night lights are back in San Diego County. Student-athletes have been out of competition since last year and now, after a local judge gave the go-ahead, high school football is back.

It’s a football season like we’ve never seen before, and even more so for the Cathedral Catholic High School community, who is remembering a coach lost in a violent crime last month.

“I still will find myself looking over my shoulder, you know, saying, ‘Where’s Coach Fierro?’ knowing he’s not gonna be there,” said John Montali, a football coach at CCHS who called Mario Fierro a best friend.

High school football made its season debut Friday, and the first game on the slate set a CIF record. NBC 7’s Derek Togerson has more.

Fierro, 37, was shot and killed outside his North Park home last month. His loved ones have described him as an incredibly passionate teacher. Students say when you stepped into his classroom or on the field, you could always feel the energy. Fierro was remembered ahead of the kick-off Friday night.

“We offer up the entire 2021 season to the memory of Mario Fierro,” Montali said during a tribute. Fierro’s family was honored with a bouquet of flowers on the field.

Montali said Junior Varsity and Varsity coaches wore white belts in Fierro’s honor. He joked that Fierro was fashionable and would wear a white belt to every game. Montali said he wore a pair of glasses Fierro lent him last season.

“He’ll be able to see the game through my eyes ‘cause I’ll still be wearing those glasses tonight.”

Fierro’s impact on the team and community is far reaching.

“The kids are honoring his name by every play they play, every pass they catch, every tackle they make, every touchdown they score is all in his name,” said Montali.

Physically distanced families in the stands said they felt a heightened sense of unity.

“Even though we were all separated because of social distancing, because of the pandemic, Fierro brought them (the team) back together somehow, and it’s amazing, it’s heartbreaking, but his (Fierro’s) legacy will live on through the way these young people chose to live their lives,” said Fara Moi, mother to CCHS’s Jackson Moi, no. 51.

“It means a lot to the whole community. Everyone’s able to get out play some high school football again. We miss the Friday night lights,” Montali said.

Friday night lights – a sign of brighter days ahead.