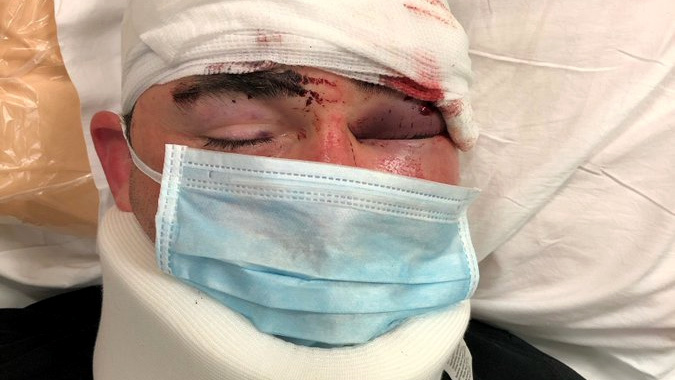 VISTA, Calif. — A San Diego sheriff’s deputy is recovering from what authorities call a violent, unprovoked attack at a detention facility.

The San Diego Sheriff’s Department said Deputy Michael Cascioppo was escorting a nurse in a housing module at the Vista Detention Facility Saturday around 2 p.m. when the attack happened.

“When Deputy Cascioppo and the nurse were walking by a particular cell, one of the two inmates inside got the attention of the deputy. The inmate asked if the deputy could pass a food tray to the inmates in the cell next door,” the sheriff’s department said in a news release.

When Cascioppo opened the cell door, two inmates rushed out and started attacking him, authorities said. Cascioppo was punched and kicked multiple times in the torso and head.

Deputies said Cascioppo tried to defend himself but the two inmates pulled him into their cell and continued their assault until other deputies stopped the attack.

Cascioppo walked out of the cell on his own but suffered multiple injuries to his head and torso. He was taken to a hospital and released later Saturday night.

The sheriff’s department said when deputies talked with him Sunday, his one concern was the nurse’s well-being.

“He wanted to make certain the nurse had not been injured. The nurse was able to flee and was not assaulted,” the department said.

Detectives with the Sheriff’s Detentions Investigation Unit are investigating and the identities of the two inmates are being withheld.

Authorities said a deputy always accompanies medical staff when they make contact with inmates. Medicine is distributed inside housing modules a couple of times a day at all jails. Due to current COVID-19 protocols and to limit exposure, inmates are locked inside cells while medication is distributed.